After a vacation week and another rainy week in April, there are many makeup games in the coming weeks to be played.

However, there are three teams getting some early separation from the rest of the pack.  Undefeated Hopkinton, and a pair of one-loss teams, Medway and Norton, are at the top of the standings, but based on this week’s results, there is a lot of excitement still to come.

Medway defeated Medfield on Monday, 3-2, behind yet another solid game from Catherine Higgins, who also had a great game in a win against Bellingham later in the week.  Millis got a solid offensive performance in an 11-0 win against Westwood on Monday, only to fall victim to Norton on Friday by the same score.  The Lancers have rebounded from a narrow defeat to Hopkinton by winning their last three games by a combined score of 26-2, with Kelly Nelson allowing just one hit in the three games combined. In yet another close game in the Westwood/Medfield rivalry, Medfield eked out a 2-1 victory Friday over the Wolverines behind a gritty performance by sophomore pitcher Alana Potts.

Key matchups in the upcoming week are:

Standings and League Leaders follow below:  As always, all stats can be found at maxpreps.com 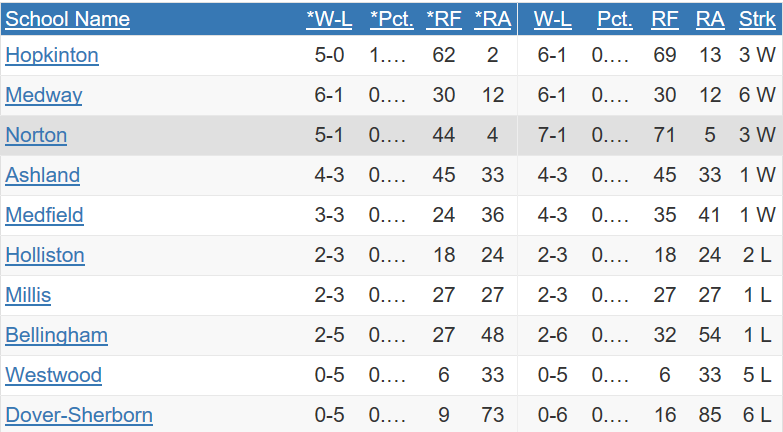 Courtesy: HCAM Television (Hopkinton Cable Access) 5/17/16 – Hillers Softball took the 9-0 shutout win over Westwood, facing one of the best hitting teams in the TVL did not phase Bri Mirabilie a single bit, […]