The first two weeks of the TVL Softball season has shown that there are some new teams on the rise, some great rivalries have continued to have exciting matchups, and some new coaches are finding early season success.

The TVL is lucky to have three new coaches join us this season.  Lauren Hillberg has taken over at Westwood for (new 1st-time father) Jonas Sherr, Steve Abbatine is the new head coach at Ashland, and Scott Soderburg has returned to the diamond for Hopkinton, this time in the head coaching role.  All three are coaching talented teams, and both Ashland and Hopkinton  earned their coaches their first TVL wins in their very first games.

Ashland and Medway have been the surprises of the young season so far, both earning 3-1 records and giving the TVL one of its most exciting games, a 1-0 walkoff Mustang win.  Freshman phenom Catherine Higgins is getting done at the plate and in the circle, with a 3-1 record, 1.25 ERA and 42 Ks to start her varsity career.

While those two teams may be a surprise at the top of the standings, three other playoff teams from last year are also making noise early this season.  Holliston and Norton have only a loss each, and have been led by perennial TVL stars Kelly Nelson (Norton) and Grace Dzindolet (Holliston).  Nelson has giving up only 2 ER on the young season, and has led her team to a 4-1 record by throwing a perfect game and a one-hitter already this season, while Dzindolet has picked up where she left off last year, hitting .455 and playing great defense.

The only undefeated team in the league is Hopkinton, who pounded D-S and Medfield before scratching out a run in the 7th to hand Norton their first loss of the season this past Thursday.  Heather Holly has had a great start to the season for the Hillers, posting a perfect 0.00 ERA with two wins.

This season is shaping up to be a very exciting one, based on this early sample from the first fortnight of action. 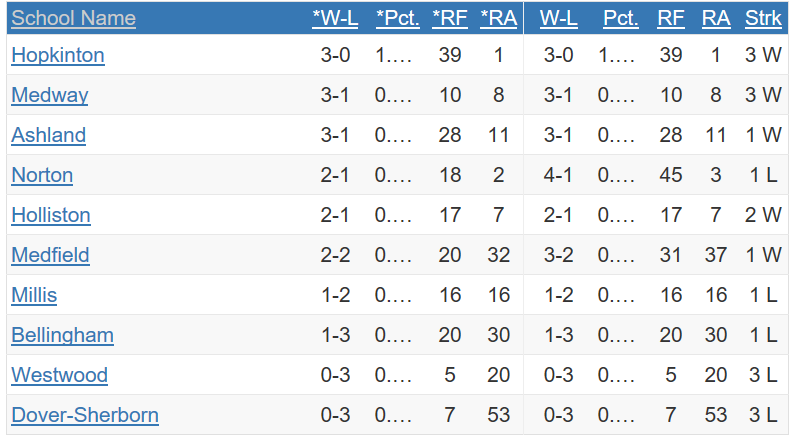