(Contributed Article)
Medfield and Medway go down to the wire in another TVL basketball heavyweight slugfest. Medfield came into the game atop the TVL standings with a league record or 11-2 (11-4 overall). Medway was just a game behind at 10-3 (11-3 overall) and had already beaten Medway by 3 points at home one month prior.

Last night game was back and forth throughout. The home team jumped out to a quick lead with a balanced attack, but Medway battled back behind the hot shooting of junior guard Nick Assad and senior guard Michael Slayton. Medway held that lead for much of the 2nd quarter before Medfield fought back with a big run capped off by a 3 pointer by senior captain David Fitzgerald at the buzzer to tie the game up at 32 going into the half.

This great battle continued into the 2nd half of this close game with many lead changes and Medfield taking a 1 point lead (43-42) into the final quarter. The defenses clamped down for the low scoring 4th quarter. With 9 seconds to go in the game and Medway clinging to a 1 point lead (51-50), Medfield’s junior guard Jake Dubbs drove the lane trying to score the game winning basket when he was fouled.

Dubbs hit both free throws, giving Medfield the 1 point lead (52-50). Medway inbounded the ball to junior forward Liam Regan who took it the length of the court, pulling up for a jumper in the lane with only a few seconds to go but had his shot blocked by Medfield. Regan then dove on the loose ball and was able to get a jump ball called by the referees. With the possession arrow in Medway’s favor, they go the ball under the basket with just over 2 seconds to go in the game, still down by 1.

The ball was then inbounded to Nick Assad who took a short jumper and was fouled with less than a second left in the game (.8 seconds). Assad hit both clutch free throws, giving his team the 1 point lead and the win after Medfield was unable to get a score with the little time remaining. The Medway student section who traveled to the away game erupted with cheers and celebrated with victory with their team on the court after the final buzzer went off.

Along with hitting the 2 game winning free throws, Assad also hit 4 three pointers throughout the game and was the game’s leading scorer with 14 points. Regan and senior forward Andrew Tieman also had double digit point totals for the Mustangs. Medfield had a very balanced attack with 8 players scoring at least 3 points and were led by senior forward Chris McGrory.

This result now brings Medway and Medfield tied atop the TVL standings at 11-3. But Holliston and Westwood are still right behind them 10-3 league records, both looking to keep pace tonight in their games. Holliston has a home game against the Hopkinton Hillers (6-8 overall), while Westwood has a home game against the Millis Mohawks (10-5 overall). 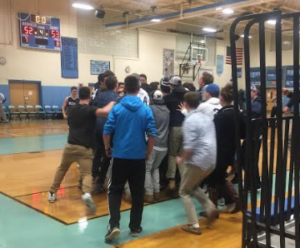 Less than 3 weeks left until tryouts. For more info and to register click here: https://t.co/H3xwDX3Ps0 pic.twitter.com/7OT5eFIZSD

Courtesy: HCAM Television (Hopkinton Local Access) -On Saturday March 10th it was the Division 2 central sectional finals, the Hopkinton Girls met up with the Medway Mustangs at Worcester Polytechnic Institute. In the 1st quarter, […]