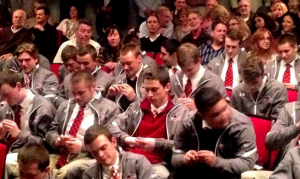 BACK to BACK Super Bowl Wins!
The 2015 Panther Football Team was playing to defend their 2014 State Super Bowl Championship with a talented and hungry group of players who wanted to prove they could accomplish back to back Super Bowl Titles. They won amazing early season games over highly rated Millis and Duxbury, with spectacular last minute heroics. Then they ran through and over TVL opponents, including a decisive victory over rival Westwood to take the TVL Title. By the time the playoffs started, they were tried and tested, and were able to win big games by good margins, with one character building comeback win over Middleborough; a 29-28 win after being down 28-15 in the 4th quarter. The Super Bowl win over Chicopee Comp was a powerful 27-6 win.

Article by: Steve Watson Medway 20, Bellingham 12 -Huge rebound win for Medway after getting getting blanked by Hopkinton last week. -Medway could’ve folded after Bellingham returned the opening kickoff for a TD. But they […]